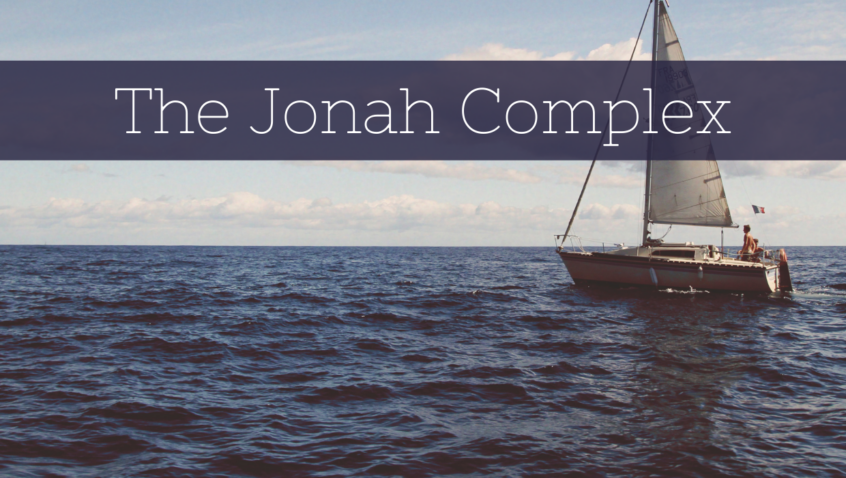 I was reading the book of Jonah this morning. And it struck me just how relevant his story is.

To recap, God tells Jonah to “get up and go to the great city of Ninevah”, and Jonah really doesn’t want to go. Ninevah is a non-covenant enemy of Israel. Jonah can’t stand them. Instead of listening, Jonah runs in the opposite direction. In the process of his disobedience, he brings much trouble on himself and those around him.

Incidentally, “down” is a running theme in the book of Jonah. Down to the port of Joppa, down in the hold of the ship, the storm came down on the sailors, Jonah was thrown overboard and went down into the heart of the sea, he sank down into the very roots of the mountains, went down into the belly of the fish, and so on.

To run from God is to always go down.

After three days, God orders the fish to spit Jonah onto the beach. Jonah goes to Ninevah where he preaches a less than moving sermon saying, “Forty days from now Ninevah will be destroyed!”

Side note: it wasn’t about what Jonah said or how he said it; there was nothing particularly eloquent or moving about his warning. Ninevah’s repentance was about the heart of God and the preparation He’d done beforehand. It’s an encouraging reminder to know God won’t send you into a situation where He’s not already prepared the outcome.

The Ninevites immediately repent. Revival breaks out, and God halts His plan to destroy the city. Upon this occurring, Jonah throws the most childish yet relatable tantrum. He tells God, “Didn’t I say before I left home that you would do this, LORD? That is why I ran away to Tarshish! I knew that you are a merciful and compassionate God, slow to get angry and filled with unfailing love. You are eager to turn back from destroying people. Just kill me now, LORD! I’d rather be dead than alive if what I predicted will not happen. (Jonah 4:2-3)

Jonah then goes off to stew under a shade plant so he can watch and see how God deals with the city. God sends a worm to destroy the plant and steal its shade, and then He sends a scorching wind to blow on Jonah. Even still, Jonah wishes to die rather than see the mercy of God play out on his enemy.

God replies with, “Shouldn’t I feel sorry for a city with more than 120,000 people in spiritual darkness, not to mention all the animals. Should’t I feel sorry (compassion) for such a great city?”

Jonah is a lot like many of us are now, right down to the “I’m feeling sorry for myself and want to sulk” attitude. We see a group of people who don’t live up to our self-imposed standard. They don’t fit our definition “worthy”. Because man’s definition and God’s definition rarely align unless we’re willing to change our minds to God’s way of thinking. The Bible says, “For just as the heavens are higher than the earth, so My ways are higher than your ways and My thoughts higher than your thoughts (Isaiah 55:9).”

Sometimes, we have to unlearn our wrong ideas about God. That’s not always easy, and it oftentimes comes at the expense of our pride. As we work on this unlearning, we can begin to see that our misguided theology doesn’t align with what we start uncovering about the nature and character of God. Because of this cognitive dissonance, we tend to slip back into acting narrow-mindedly just as Jonah did. “If they don’t comply with how I feel and what I think—even if I believe I’m doing so in God’s name—they shouldn’t have anything good. Not only that, they deserve everything bad that happens to them. They’re my enemy.”

Jonah’s reaction, as hateful as it seems, is human nature. Imagine now the group of people you most view as an enemy to your lifestyle, ideology, or religion. Now, imagine God telling you to warn them—with all the damage they’ve done, all the hate they’ve created, and all the hurt they’ve caused—so that He can save them! I’m not sure how many of us could do that without a large degree of hesitancy or wavering at best, and a Jonah-sized reaction at worst. When you truly begin to seek to understand Jonah’s feelings toward Ninevah, his response suddenly becomes very personal.

Our feelings about these people, whoever they may be for you, aren’t God’s feelings though. Our sense of justice and fairness are easily misguided when our feelings trump what we know of God. We have to remember: God hates evil, not man. He has compassion on ALL of humanity, no matter how dark it gets. 2 Peter 3:9 says, “The Lord is not slow in keeping His promise as some understand slowness, but is patient with you, not wanting anyone to perish but everyone to come to repentance.”

People confuse evil actions and even evil hearts with evil beings. Humans aren’t evil. We are created in the image of God, and God isn’t evil. That in no way means we can’t be influenced by evil or turn toward it. But that doesn’t make us evil. We are never beyond redemption (with the exception of blasphemy). Paul himself was guilty of murdering Christians because he hated them and believed they were wicked and corrupt … until his personal encounter with God. A persecutor, a facilitator of murder, and a self-righteous judge, yet he became one of the biggest influences and mouthpieces of the Gospel. How might a present world without a past Paul look? Pretty bleak, I’d say.

We never get to see how Jonah responds after God’s final explanation. We don’t know how the rest of Jonah’s story played out, what happened to him, or the direct result of Ninevah’s repentance. But those things weren’t the point. The moral of the story is learning to love those we’d sooner curse and to show compassion the way God does.

The longer I stewed on this four chapter book, the more I felt convicted. I suffer from the Jonah complex. I’m guilty of the, “God, they don’t deserve it,” mentality, too. I look around at the mess we’re in, how many are struggling, and the insurmountable chasm of division and and strife we all soak in daily, and I think, “You guys deserve the struggle because of the decisions you’ve made.”

And while that’s true, so do I.

I may not have directly contributed certain issues, but I’ve certainly created my own in other ways, both for myself and those around me. My poor choices have hurt others; they’ve caused them to bleed or to serve time for crimes they didn’t commit. But God still showed (and continues show) me compassion and grace. Not because I deserve it—that’s hardly the case. But because He loves me. He wants me to turn to His safe and protective way of living for His kingdom and glory but also for my wellbeing.

When I do so, He immediately forgives me and puts my stupidity out of His mind. That doesn’t always shield me or the world from the fallout of bad decisions. Sometimes we have to pay for our choices; that’s a natural consequence. But no matter the choice, God is “slow to anger and filled with unfailing love (Jonah 4:2).” He’s eager to forgive us, and even restore us, when we turn from our wrong paths to His perfect ones.