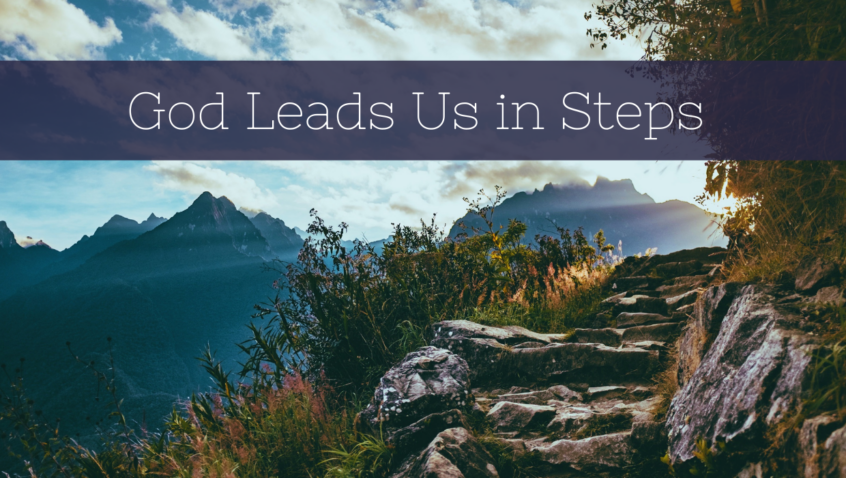 God Leads Us in Steps … Not Leaps.

Did you know that nowhere in the Bible does God call for a leap of faith? There’s not one instance where God commanded someone to do something physically or spiritually extraordinary for their particular situation.

He always led His children in manageable steps just as He does now (Psalm 37:23). God will never call you to do something that will put you in peril (Jer 29:11). He doesn’t call us to do things that are completely foreign to us or out of our wheelhouse. He will never jeopardize your future or wellbeing. We can do that to ourselves, but God won’t ever lead you down that path.

David didn’t immediately move from being a shepherd to being a giant killer. Steps needed to be taken to get from point A to point D. There was no unrealistic leap; that would have left David unprepared and inexperienced. First, he slayed the lion, then he slayed the bear. Those were steps, both to slaying Goliath and, ultimately, to becoming king. God leads us down paths that will guide us to the place He wants us to be, but each step along the way is an important lesson in learning to hear and recognize His voice (John 10:27).

That’s not to say it will always be effortless to step to the next level, but rest assured, it will be just that: one step on a path that is straight and marked for you (Prov 3:6). You’ll find peace even if when moving seems daunting.

There will be times you may not be able to see the next stone in the path. There may come a time you meet a fork in the road. If that’s the case, stand still until God reveals the following course of action. That pause may very well be your chance to rest (Psalm 23:2-3).

Don’t begrudge the steps, and don’t be tempted to leap. God doesn’t lead through leaps. He always prepares us in advance when we know how to listen to Him and follow His instructions. That’s why soaking in the Word is vital to our relationship with Him (Rom 12:2) and our ability to recognize His voice from one that would lead us astray. He will prove His way through testing, and that test is, “Does this move align with how God Himself moves?”

God’s guidance is gentle and easy even if it requires more of us than we think we have. Those are the places we can rely on Him to do what we can’t.