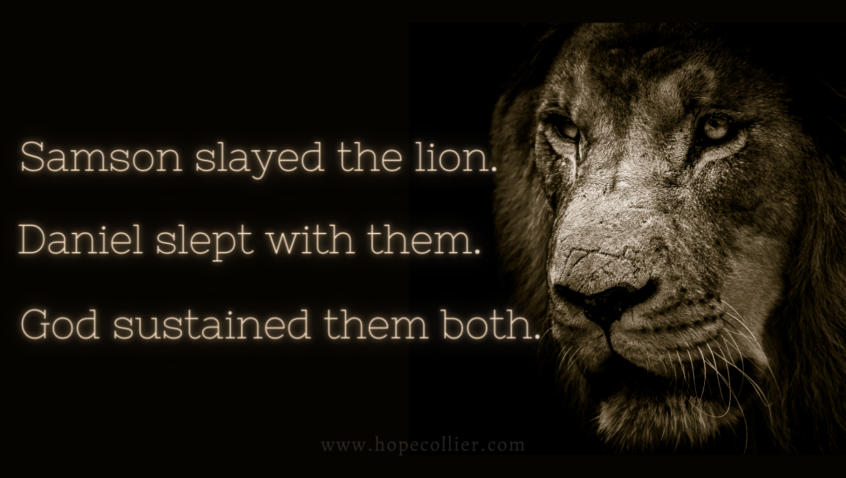 Samson slayed the lion. Daniel slept with them.

God doesn’t always confront the same problem in the same manner. If we aren’t careful, it’s easy to miss how He’s moving, because we expect it to look a certain way. With Samson, God enabled him to eliminate the threat through power (Judges 14). With Daniel, God kept him safe while He worked on Daniel’s behalf (Daniel 6). God doesn’t always pull you out of your dire situation; sometimes He fortifies and protects you as He goes ahead to fight in your place.

In Daniel’s story, the other rulers were jealous but could find no fault in how Daniel conducted himself. God had blessed Daniel because of his steadfastness, and Daniel honored God in all his ways. So, the other rulers found a way to trap Daniel — a plan King Darius couldn’t refute and that appealed to his ego. Thus is human nature when our spirits haven’t been redeemed and transformed. We seek to appease our flesh, even if that means sacrificing something meaningful and beneficial to us.

Men will conspire against us, but what we have to realize is that they’re not really conspiring against us; they’re conspiring against God (Matt 10:22; John 15:18). After God saved Daniel, King Darius was so infuriated by those who tricked him into throwing Daniel into the lions’ den that he had them and their families cast down instead. Before they hit the ground, the lions devoured them.

We see a similar issue with Shadrach, Meshach, and Abednego (Daniel 3). Bitter men plotted against the trio and appealed to King Nebuchadnezzar’s pride. It worked … for a moment. However, the young men’s deliverance was about more than just protecting them. God was glorified throughout the whole of the Babylonian empire. The king went on to pass a law that no one could even speak an ill word against God.

What the enemy risks in his attacks against God’s chosen is that their deliverance is never just about them. God always turns it on its ear and comes out more than victorious, proving His power, justice, and love for His people.

Sometimes our situation looks hopeless, but God always fulfills His covenant with us when we do our part. He doesn’t allow us to go through seasons of testing to put us back where we were before the test. He uses those situations and struggles to bring glory to Himself for the sake of His kingdom but also to advance His children for their faithfulness and obedience.

No matter the adversity, God is either equipping you to either tear it limb from limb or to rest in His peace as God Himself conquers the plan of the enemy in your stead. Find confidence in that truth, keep speaking the Word over your lives and situation, and continue growing in faith by the power of the Holy Spirit.